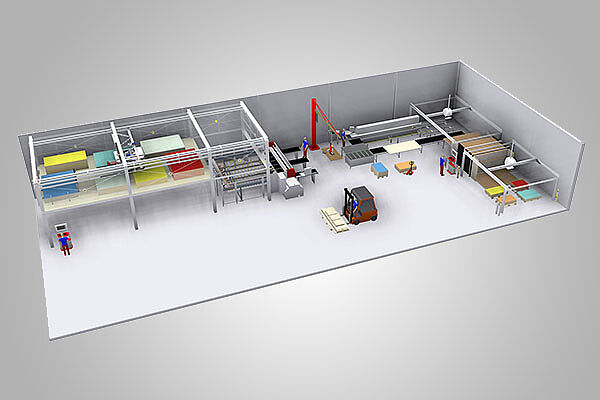 Even in the environment of smaller production machines, the necessity of well thought-out handling systems is hardly ever questioned. Fully automatic loading and unloading systems are being used more and more frequently not only in larger companies, where automation has long since found its way into production, but also in smaller companies. The clear commitment to relieving the burden on employees is often more important than simply gaining production time in furniture manufacturing.

Even relatively low-cost investments, such as simple returns on edge banding machines, for example, bring about precisely these effects. There are hardly any other production areas where shorter payback times can be achieved than on edge banding machines which can be operated by just one employee after the installation of return systems. The same applies to panel saws and manually operated CNC or nesting machines with attached loading systems.

As a medium-sized company, we have specialised in handling solutions for all production processes such as manipulation for panels and parts, loading, unloading, buffering and software development, as well as networking of new and existing machines from various manufacturers. As a family owned business, we not only focus on high quality and the use of the latest components, but also on long-term partnerships with customers and suppliers. "Optimal advice at the time of purchase is just as important as perfect after-sales service," says Stefan Barbaric.